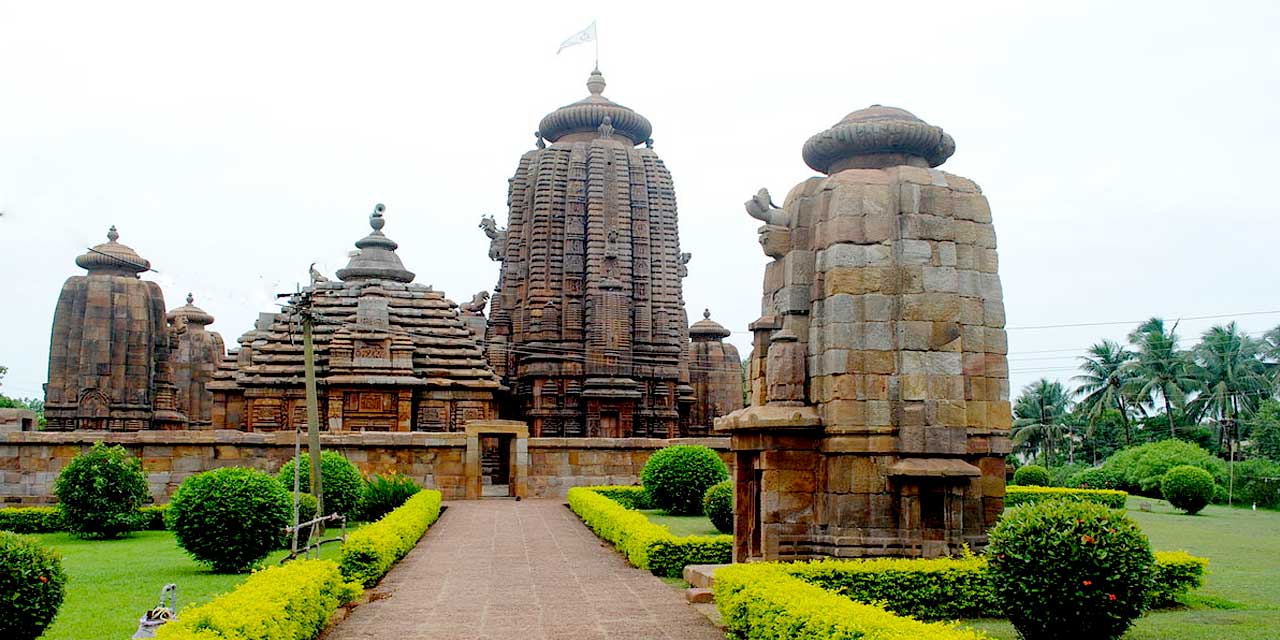 Brahmeshwara Temple, located in Bhubaneswar, is one of the finest and oldest temples of the country. This Hindu shrine is dedicated to Lord Shiva, who is worshiped here in the form of a Shivalinga. Brahmeshwara meaning the ‘Supreme Being of the Universe’ is another name by which Lord Shiva is known to his devotees. The temple receives hordes of devotees on a daily basis. This number increases significantly on the auspicious occasion of the Mahashivaratri festival. One of the major highlights of this temple is its detailed architecture.

It is said that it was her who started the tradition of presenting beautiful women called Devadasis to the deity. These women would worship the deity and also perform music and dance for him. Glimpses of the Devadasi tradition can be found in the inscriptions in the premises. There is also belief that the tantric religion was also followed at the temple. The terrifying figures of Lord Shiva and Chamunda inscribed on the temple walls are a testament to it.

The architecture of the temple has a mix of Lingaya and Kalinga architectural styles. The shrine is classified as a Panchayatana temple, featuring the main temple along with four other shrines at four corners and a large square pond in the complex. Made up of sandstone, the temple has excellent sculptures and carvings on its inner and outer walls. Traditional wood carving methods have been used in its architecture; however, it has been applied on its stone structure.

The temple has four parts, namely Vimana (sanctum), Natamandira (dance hall), Jagamohana (prayer hall) and Bhogamandapa (offering hall). The main section of the shrine is Jagmohana, which comprises the sanctum. The walls of the Jagamohana feature several carved designs of Odisha’s ancient art and tradition. The Jagamohana is also known for featuring the lion head idols.

The sanctum consists of a black stone Shivalinga along with idols of Lord Shiva and Goddess Lakshmi. The porch and the tower of the temple are beautifully carved with exquisite sculptures. The sanctum is around 18.96 m tall whereas the prayer hall is smaller than Vimana. This hall features carvings of many wonderful figures. The carvings made on the door frames of the temple feature brilliant flower designs along with that of flying figures.

The outer wall of the temple is adorned with the carved images of different deities, birds, animals, dancers, musicians holding flutes and mythological stories from the past. It also has an image of Lord Shiva in the form of Nataraj along with sculptures of females adorned with ornaments.

Inside the temple, figures related to the tantric cult, an image of Goddess Chamunda standing on a carcass holding the head of a human and a trident in her hand are engraved on the walls. Terrifying figures of Lord Shiva and other deities have also been carved on the inside walls of the shrine.

Another highlight of the temple is the eight guardian gods that have been sculpted inside the sanctum. These are of Kubera (God of Wealth), Yama (God of Death), Vayu (God of Wind), Indra (God of Rain), Agni (God of Fire), Nirriti (God of Suffering), Varuna (God of Ocean) and Ishana (Shiva). The temple is surrounded by a wonderful lush green garden. There is also a pond inside the temple premises.

Things to do at Brahmeshwara Temple Bhubaneswar

Witnessing the splendid architecture of the Brahmeshwara Temple is the main thing to do on a visit here. The intricately-carved sculptures and the varied beautiful images on the walls and the doors of the shrine are definitely worth exploring. Visitors to the temple can also relax and spend time near the pond and in the beautiful green garden that lies in the temple premises.

Since there are a number of temples in Bhubaneswar, tourists can head to popular nearby shrines from the Brahmeshwara Temple. One such splendid place of worship in proximity is the Rajarani Temple, which is only 1.5 km away. Other temples worth visiting in the city are Ananta Vasudeva Temple, Lingaraj Temple, Mukteswara Temple, ISKCON Temple and Parsurameswara Temple.

There is no entry fee to visit the Bhubaneswar Brahmeshwara Temple. Devotees can enter the temple as early as 6 am. The closing time of the shrine is 8 pm. It remains open on all days of the week.

How to Reach Brahmeshwara Temple Bhubaneswar

The distance between the temple and the Bijou Pataki International Airport is around 5.3 km, and it takes approximately 19 minutes to cover this distance. On the other hand, the Bhubaneswar Railway Station is about 4.9 km away from the temple and can be easily reached in about 16 minutes.

Traveling from the airport, railway station, bus stand or any part of the city is hassle free as there is easy availability of auto rickshaws, private taxis and local buses in Bhubaneswar. You can also choose from the list of top car rental companies in Bhubaneswar to easily reach the temple. Reaching the city from any part of the country is not much of a problem as it is well connected by air, rail and road transport services.

Things to keep in mind while visiting Brahmeshwara Temple Bhubaneswar

We know that every traveller is different, so we offer a range of Bhubaneswar tour packages to suit your individual needs and interests. Whether you’re looking for an active adventure or a relaxing escape, we can tailor-make your perfect trip. We at Bhubaneswar Tourism, a division of Holidays DNA, present a variety of travel packages to cater to your varied holiday needs. Depending on your duration, budget, and other requirements, our travel packages along with an itinerary can also be customized so that you can cover the famous sightseeing places in Bhubaneswar. Please fill the Contact Us form to know more.