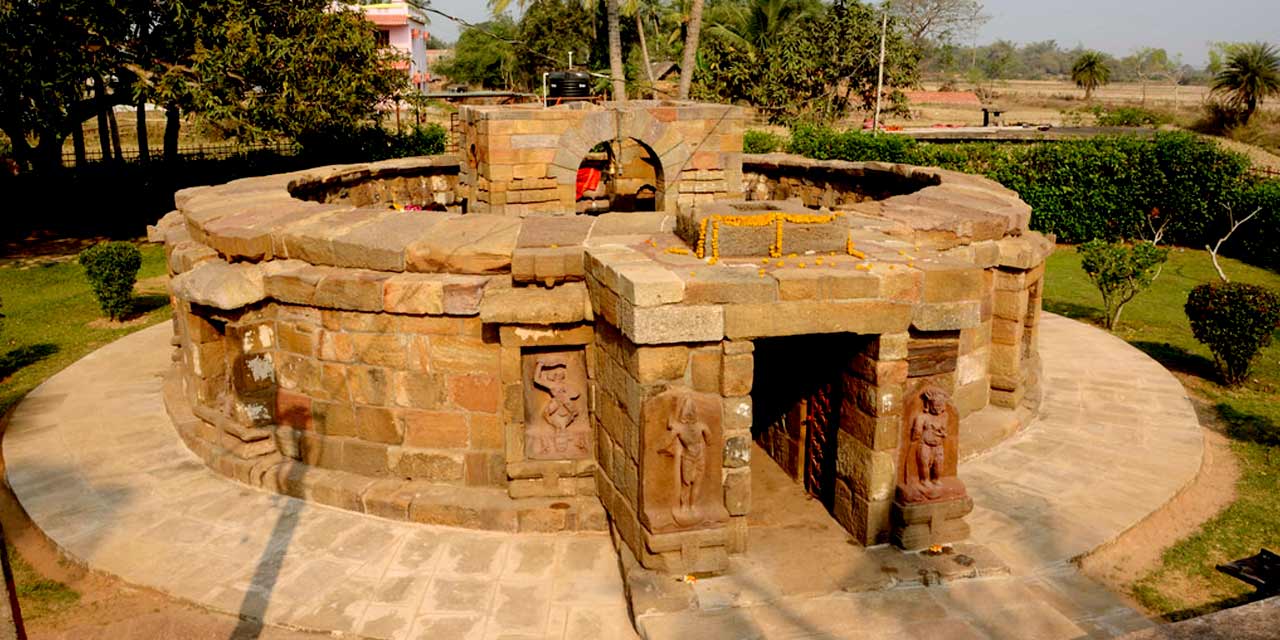 Chausath Yogini Temple, located at a distance of about 20 km from Bhubaneswar in Hirapur, is one of the four surviving Chausath Yogini shrines in India. Of the remaining three, one is located in the Bolangir district of Odisha while the other two are in Madhya Pradesh. The shrine is locally known as Chausathi Yogini, meaning 64 Yoginis (incarnations of Goddess Durga).

The presiding deity of this holy place is Goddess Mahamaya, who is considered to be one of the Yoginis. Hence, the shrine is also called the Mahamaya Temple. The daily prayer and rituals in the temple includes the worship of Bhumandala that is the five elements of nature - water, sky, fire, earth and ether. The Yogini practice has been known to include Yoga along with the practice of tantrism, having a strong connection with tribal and rural traditions.

This temple is believed to have been built by Queen Hiradevi of the Bhaumakar dynasty in the 9th Century AD. However, with time, the temple had lost its glory before it was discovered and restored by renowned historian Kedarnath Mohapatra in 1953, to its present form.

Every year in the month of December, the Chausathi Yogini Mahotsav is organized near the temple. Nrutya Prativa, a city-based cultural organization, with support from the Odisha Tourism Department conducts this three-day event, in which classical dance and vocal artists from across the country perform and mesmerize the audience.

Presently under the supervision of the Archeological Survey of India, this shrine has a distinct architecture featuring a circular open air sandstone structure, far from the traditional Kalinga style of temple architecture. Located on the banks of Bhargavi River, it is one of the smallest Chausath Yogini temples with a height of only 8 feet and a diameter of 30 feet.

The entrance of the temple is quite narrow and low in height. Only one person can enter easily at a time and needs to lower the head while entering. The outer wall of the doorway to the shrine is carved with two doorkeepers (dwarapalakas) on each side.

These doorkeepers are known as Jai and Vijay. From the entrance, a narrow path leads to the main sanctum. This path is sculpted with figures of Kaal and Vikaal. The outer wall of the shrine also features sculptures of nine female figures that are called Katyayini.

The main sanctum is round in shape with an open roof. The interior wall of the shrine consists of 60 niches, each one for the 60 Yoginis. Each niche is two feet high. The idols of the Yoginis are made up of black granite, with each in a different standing pose on their Vahanas (animal vehicle).

Each of these statues is adorned with different ornaments like bangles, necklaces, anklets, earrings, garlands, armlets, etc. Some of the sculptures of the Yoginis are depicted as playing drums, balancing on a pair of wheels and also shown as huntresses, holding an arrow and bow.

In the middle of the sanctum, there is a small square pavilion, which is known as Chandi Mandap. There is a sculpture of Goddess Kali standing on a human head at the center of the pavilion.

The four sides of the pavilion are surrounded by four Yoginis, along with four Bhairavas. Out of the four, three Bhairavas are shown in a sitting position while the fourth one, known as Ekapada Bhairava, is in standing position. It is believed that there was a statue of Lord Shiva in the form of Nataraja installed inside the Chandi Mandap, but is currently missing.

The premises of the temple includes a podium in front of the shrine, which is known as the Surya Pitha from where visitors can worship Lord Sun, and a small pond called Puskarini. There is a small temple in the complex that is dedicated to Lord Shiva called Sankateshwar.

Things to do in Chausath Yogini Temple, Hirapur Bhubaneswar

The unique architecture of the temple is worth exploring and so is finding about the Yogini cult and their practices. On a visit to this one-of-a-kind shrine, tourists will feel transported back to a different era altogether.

Besides the Chausath Yogini Temple, tourists can visit many special shrines in the city of Bhubaneswar including the Mukteswara Temple, Rajarani Temple, Brahmeshwara Temple, Parasurameswara Temple and Lingaraj Temple that are famous for their excellent temple architecture.

There is no entry fee to visit the Chausath Yogini Temple. Devotees can enter the temple as early as 6 am. The closing time of the shrine is 7 pm. It remains open on all the days throughout the year.

The Chausath Yogini Temple lies at an approximate distance of 10 km from the Biju Patnaik International Airport in Bhubaneswar. The nearest railhead to this shrine is the Bhubaneswar Railway Station, which is about 9.3 km away. The Baramunda ISBT is at a distance of about 14 km. Transport services like private taxis and auto rickshaws can be availed from the airport, railway station, bus stand or any part of the Bhubaneswar city to reach the Chausath Yogini Temple, hassle free. You can even hire a local taxi from the list of top car rental companies in Bhubaneswar to visit all the popular sightseeing places of Bhubaneswar.

With our Bhubaneswar tour packages, you can tailor make your own trip exactly how you want it. You can choose how long you stay for, which sights and attractions you see, and we can even help with booking your flights and accommodation. Bhubaneswar is a bustling city with so much to see and do, and our experienced travel experts can help you make the most of your time there. So whether you’re looking for a cultural experience, a shopping trip or a relaxed holiday, Bhubaneswar Tourism can help you plan the perfect tailor-made holiday. Please fill the Contact Us form to get in touch with us.