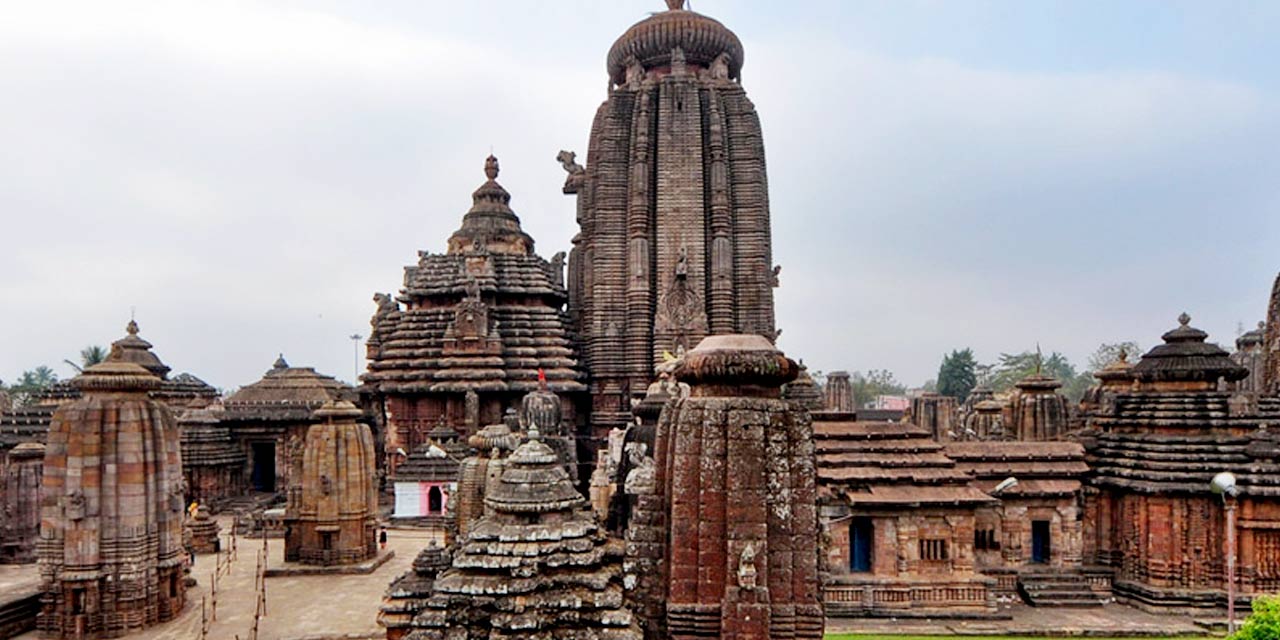 The largest and the most sacred shrine of the Temple City Bhubaneswar is the Lingaraj Temple. The temple is devoted to Lord Harihara, which essentially means it is dedicated to Hari (Lord Vishnu) and Hara (Lord Shiva).

Built in the 11th century, this place of worship houses a Swayambhu (self-manifested) Shivalinga, which is believed to be 8 feet in diameter and 8 inches tall. An architectural wonder, the Lingaraj Temple is the top tourist attraction of the city; however, it can only be visited by Hindus.

A platform has been built outside the complex for non-Hindus to get a glimpse of this magnificent ancient structure. Thousands of devotees flock the temple across the year, but this number increases significantly on festivals like Mahashivratri and Ashokastami that are celebrated with much fanfare in its premises.

Built in Kalinga architectural style, the temple boasts of finely carved sculptures on the walls of the temple. Spread over a huge area, the temple complex also features 150 smaller shrines. The height of the tower of the main sanctum is quite high and can be seen from a distance.

According to historical accounts, the Lingaraj Temple was built in the 11th century by Jajati Keshari, who was a Somvanshi king. However, there is a belief that the Swayambhu Shivalinga in the temple was worshiped even in the 7th century. As per mythological studies, the temple finds its name in Brahma Purana, which is an ancient Hindu scripture dedicated to Lord Brahma. An interesting aspect of the shrine is that it signifies the coming together of two major sects of Hinduism - Shaivism and Vaishnavism.

Every year, festivals like Mahashivaratri, Ashokashtami and Chandan Yatra are celebrated in the temple with loads of enthusiasm. Among these, Mahashivaratri is the most important one; it is celebrated in the Phalgun month of the Hindu calendar. On this day, thousands of devotees visit the temple to make offerings to Lord Shiva. Many devotees also keep fast through the day and break it at night, after a Mahadipa (big illuminated earthen lamp) is raised atop the temple.

Chandan Yatra is a 21-day festival that begins on the auspicious day of Akshaya Tritiya. During this festival, the idols of the deities are taken to the Bindu Sarovar and a procession is performed in the water in beautifully decorated narrow boats called Chapa. The idols are then sanctified with Chandan (sandalwood paste) and water.

The annual Car Festival or Rath Yatra of Lord Lingaraj is called as Ashokashtami. It is celebrated with much fervor on the eight day of Chaitra month (March/April) as per the Hindu calendar. During the festival, the idol of Lord Lingaraj is taken to the Rameswar Temple (also called as Mausi Maa Temple) in a decorated chariot. The idol of the deity is brought back to the Lingaraj Temple after four days, following a ritual bath at the Bindu Sarovar. Devotees gather in large numbers to attend this festival and pay their homage.

The glorious Lingaraj Temple is a great example of the Kalinga style of temple architecture. The temple complex has a huge laterite compound wall measuring 22,720 sq. m. Within this complex lies the 180 feet tall mesmerizing Lingaraj Temple that easily dominates the city’s skyline. There are 150 small shrines in its courtyard as well.

The main entrance of the temple is on the eastern side while on its southern and northern sides, there are smaller entrance gates. The entrance porch’s gate of the shrine has been constructed using sandalwood.

The temple, which is made of sandstone and laterite, has four main parts: Vimana, Jagamohana, Nata Mandira and Bhoga Mandapa. Vimana is the main sanctum, whose tower is 180 feet high and is intricately sculpted from top to bottom. Jagamohana is the assembly hall, which has two entrance gates one from the north and another from the south. The entrance gates of the assembly hall feature perforated windows with images of lions on hind legs.

Nata Mandira is the festival hall, which has two side entrance doors and one main entrance door. The side walls of this hall feature intricately sculpted figures of couples and women. Bhoga Mandapa is the hall of offering, which has four doors on each of its sides. The roof of this hall is pyramidal in shape that holds an inverted bell and a Kalash at the top. The exterior walls of this hall feature sculptures of beasts and men. All these halls are aligned in one direction and increase in height gradually, from Bhoga Mandapa till Vimana.

Things to do at Lingaraj Temple in Bhubaneswar

Besides offering prayers at the temple, the most obvious thing to do at this place is to marvel at its grand architecture. A number of important religious attractions are located close to Lingaraj Temple that must be definitely visited.

The Bindu Sarovar is situated to the north of the Lingaraj Temple. This lake is 700 ft wide and 1300 ft long. It becomes the focal point of the Chandan Yatra festival each year. A beautiful garden lies on the western banks of it, known as Ekamra Van, meaning a forest of a single mango tree. According to the Hindu mythology, Bhubaneswar was referred to as Ekamra Van in ancient times. This garden has a variety of plants, which are associated with different Hindu gods and goddesses and are known for their medicinal properties.

Some of the other religious places to visit after exploring the Lingaraj Temple are the famous Mukteswara Temple, Rajarani Temple, Ananta Vasudeva Temple, Brahmeswara Temple and Parasurameswara Temple. Each of these temples is sacred to Hinduism and are popular for their mesmerizing architecture.

Besides temples, tourists can also head to other interesting places of the city like the Odisha State Museum, Odisha Craft Museum, Udayagiri and Khandagiri Caves and Dhauligiri Shanti Stupa.

Lingaraj Temple is located in one of the prime locations of Bhubaneswar; hence, can be easily reached from the airport, railway station, bus station and other parts of the city. Commuting to the temple is quite easy as auto rickshaws, local buses and private taxis are readily available in the city.

The distance between the Lingaraj Temple and the Biju Patnaik International Airport is approximately 4.4 km, and it takes about 10 minutes to reach the temple by auto rickshaw or taxi. From the Bhubaneswar railway station, the distance is about 4.8 km and can be easily covered in approximately 12 minutes by availing an auto rickshaw or taxi service. Tourists can also hop onto local buses or hire a private cab from top car rental companies in Bhubaneswar to reach the shrine.

Things to keep in mind while visiting Lingaraj Temple

The Temple city of India offers a lot more than just temples and to explore the famous sightseeing places of Bhubaneswar, book a Bhubaneswar Tour package with us. Bhubaneswar Tourism, a division of Holidays DNA offers a variety of tour packages and you can choose one depending on your budget, duration and other preferences. To know more about our offerings, please fill the Contact Us form.