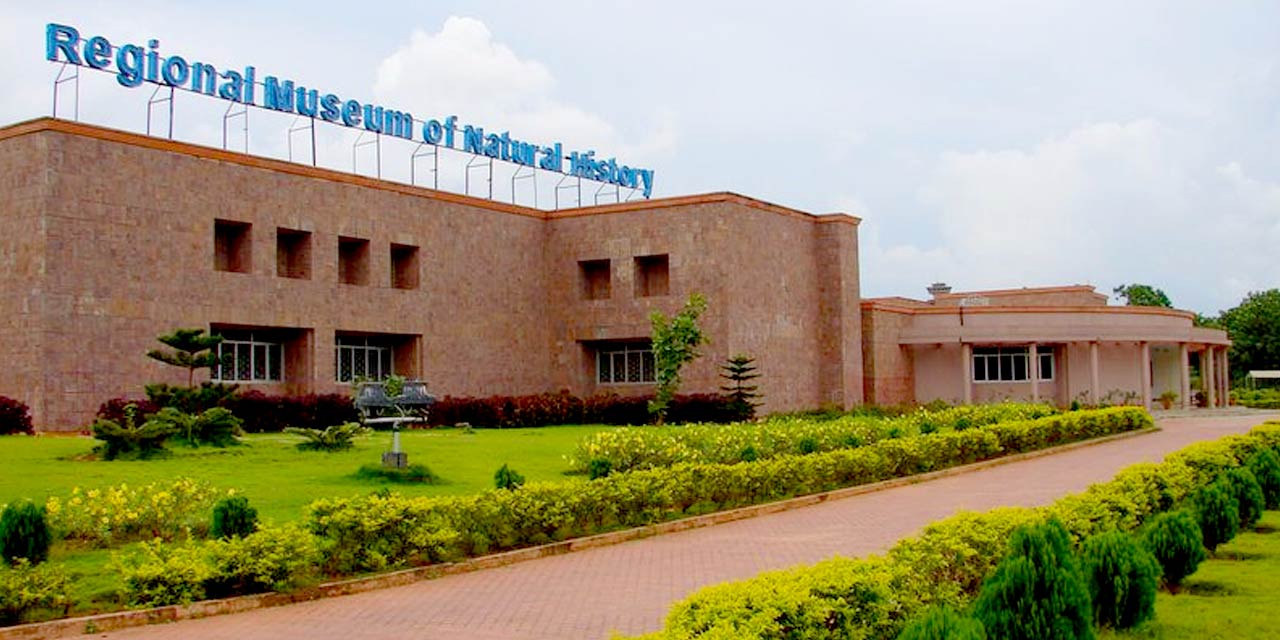 Regional Museum of Natural History is one of the most popular tourist attractions in Bhubaneswar, Odisha. A one-of-a-kind museum in the eastern part of the country, this regional museum is home to a rich biodiversity that has been collected from different parts of the state of Odisha, the north-eastern region of India, the Andaman and Nicobar Islands, the Madagascar region and the African forests.

The museum is a wonderful attempt to showcase this biodiversity under one roof to create awareness about the natural heritage of the state and the world. At the same time, appraise people about the importance of the flora and fauna of the natural ecosystem and their conservation, since survival of a man is heavily dependent upon their well being. The establishment of the museum was initiated in the year 1994 by the Ministry of Environment and Forests, Govt. of India.

The biggest highlight of the museum is the enormous skeleton of a Baleen Whale, which is believed to be the biggest of its kind in India. Besides this, the museum also houses skeletons of a Toothed Whale, rhinoceros and elephants in addition to the skulls of different animal species, including that of tigers, rhinos, whales, elephants, etc. On a tour of Bhubaneswar, visiting this exciting place of interest can be great fun for tourists, especially those traveling with their kids.

The foundation of the Regional Museum of Natural History was laid back in 1994, and 10 years later, it was opened to the public. Managed by the Ministry of Environment and Forests, Government of India, the museum has on exhibition an impressive collection of plants, insects; skeletons of extinct and rare animals; photographs and related samples from across the globe, and geological information on Bhubaneswar.

It has the distinction of being the sole museum in the country that has exhibits, a rare egg of an extinct Elephant Bird and many other such unique and impressive items. The various skeletons of smaller mammals and reptiles are other exhibits that interest those who have an inclination towards life sciences.

It also showcases the biodiversity of different regions of the state, including Chilika, Bhitarkanika and Simlipal. Another interesting exhibit to witness at the museum is baobab (Adansonia digitata), which is believed to be the longest-living flowering plant in the world, having a life span of 5,100 years. The objective of setting up this museum was to impart knowledge to the student community and the general public about the significance of flora and fauna, and subsequently, creating awareness about conservation of natural resources.

In May 2017, the Regional Museum of Natural History became one of the first museums in the country to successfully generate and utilize green energy through its roof-top solar power system.

The building of the Regional Museum of Natural History in Bhubaneswar has been built quite aesthetically, with its well-structured landscape beautifully creating an environment for a joyful and informal learning experience for students and tourists alike to gather knowledge of the natural ecosystem and the critical aspect of its conservation. The museum has wonderfully put on display several exhibits under a recreated environment to throw light on the flora and fauna of various regions of the state and beyond, and their interesting inter-relationships.

Each of the galleries in the museum lays emphasis on the conservation of nature and its rich resources while showcasing ecological balance between the plants and animals. The museum authorities have put the Braille system in place so as to aid the visually challenged students in learning about different exhibits on display.

The museum offers opportunities for schools to bring students to the museum with an objective to promote environmental awareness. There is a children’s gallery in the complex as well where a number of interactive displays can be seen and enjoyed by the children. In addition, there is an auditorium and different interaction centers inside the premises, where various activities related to nature and natural history are held, from time to time.

In its complete devotion to environmental education, the museum has built theme-based galleries as well as experiential resource centers – ‘Activity Room’ and ‘Discovery Room’ – in the premises. Not just that, it has also developed certain educational and outreach activity programs, with an idea to showcase the rich natural history and heritage of the country.

It also carries out a mobile exhibition in the city called the ‘Exhibition on Wheels’, which has been designed for those, who for some reason are unable to visit the museum and also to create more awareness about conservation of natural resources.

The main attraction of the Regional Museum of Natural History has to be the whale skeletons on display – one is that of the Baleen Whale while the other is that of the Toothed Whale. The difference between these two kinds of whale is that the latter, as its name suggests, has teeth, while the former has baleen plates or baleen systems that filter out any food from the water they consume. There is also a preserved body of a Pangolin in one of the galleries, which also features a wide range of stuffed reptiles and other animals in jars.

Things to do in Regional Museum of Natural History, Bhubaneswar, Odisha

There is so much to explore and learn about at the Regional Museum of Natural History in Bhubaneswar. Kids and adults are sure to be in awe after looking at the unique items on display, especially the skeletons of the Baleen Whale and the Toothed Whale, and skeletons of other animal species. After spending quality time in the museum complex, visitors can sit and relax in the beautiful garden on the premises.

Besides this place, there are some other exciting attractions to explore nearby in the city including the Odisha State Tribal Museum, Nicco Park and ISKCON Temple.

1. State Tribal Museum: Also popularly known as the Museum of Tribal Arts and Artifacts, the Odisha State Tribal Museum was established in 1953. Dedicated to the culture and lifestyle of the 60 tribal communities of the state, the complex is also called the Museum of Man. Operated by the Scheduled Castes and Scheduled Tribes Research and Training Institute, the museum has on display a number of items that depict the attire, tradition, food and ornaments of these tribes. There is an entire section in the complex that is devoted to the history of the anthropological evolution of the tribals of the eastern region of India.

2. Nicco Park: Spread over an approximate area of 25 acres, the famous Nicco Park of Bhubaneswar is a wonderful amusement park, which has on offer 12 thrilling adventure rides, activity and game zones. Established in 1998, the park was built with guidance from the Nicco Park in Japan. The complex also has a number of food joints. All these amazing facilities make it a popular weekend getaway for the residents of Bhubaneswar.

3. ISKCON Temple: The construction of the ISKCON Temple in Bhubaneswar began in 1975 and was opened to the public in 1991. Also known as the Sri Krishna Balaram Temple, this shrine was commissioned by Sri Gaur Govinda Swami while inaugurated by Sri Nityananda Prabhu. Devoted to Lord Krishna and his brother Lord Balaram, this temple is considered quite sacred and visited by many throughout the year.

Besides the ISKCON Temple, tourists can also plan to visit the other famous temples in Bhubaneswar, a city that enjoys the moniker ‘The Temple City of India.’

There is no entry fee to visit the Regional Museum of Natural History in Bhubaneswar. The museum remains open all days from 10 am to 5 pm, except on Mondays and State Government holidays.

How to reach Regional Museum of Natural History in Bhubaneswar

The Regional Museum of Natural History is situated at a prime location – Acharya Vihar on the Sachivalaya Marg – of the city. Hence, reaching here from any part of Bhubaneswar is quite easy by opting for private taxis, auto rickshaws and local bus service called Mo Bus. The Biju Patnaik International Airport lies at an approximate distance of 5.7 km away, and this distance can be covered in hardly 11 minutes. Similarly, the Bhubaneswar Railway Station is about 4.1 km away. It takes about 9 minutes to cover this distance while it takes about 10 minutes to cover the 5.5 km between the Baramunda ISBT Bus Stand and the museum.

Reaching Bhubaneswar from the major cities of India is hassle free since regular flight, train and bus services are available to the city, all across the year. After arriving in Bhubaneswar, you can opt for a private taxi from top car rental companies in Bhubaneswar to visit its tourist attractions.

We know that one size does not fit all when it comes to Bhubaneswar holidays. That’s why our travel experts work with you to create a truly personalised experience, based on your specific interests and requirements. We at Bhubaneswar Tourism, a division of Holidays DNA can design an itinerary that includes everything from luxury accommodations and private transfers to bespoke experiences and guided tours. We have a wealth of knowledge and experience when it comes to planning Bhubaneswar holidays, so trust us to create a tailor-made trip that you’ll treasure forever. Contact Us to know more!