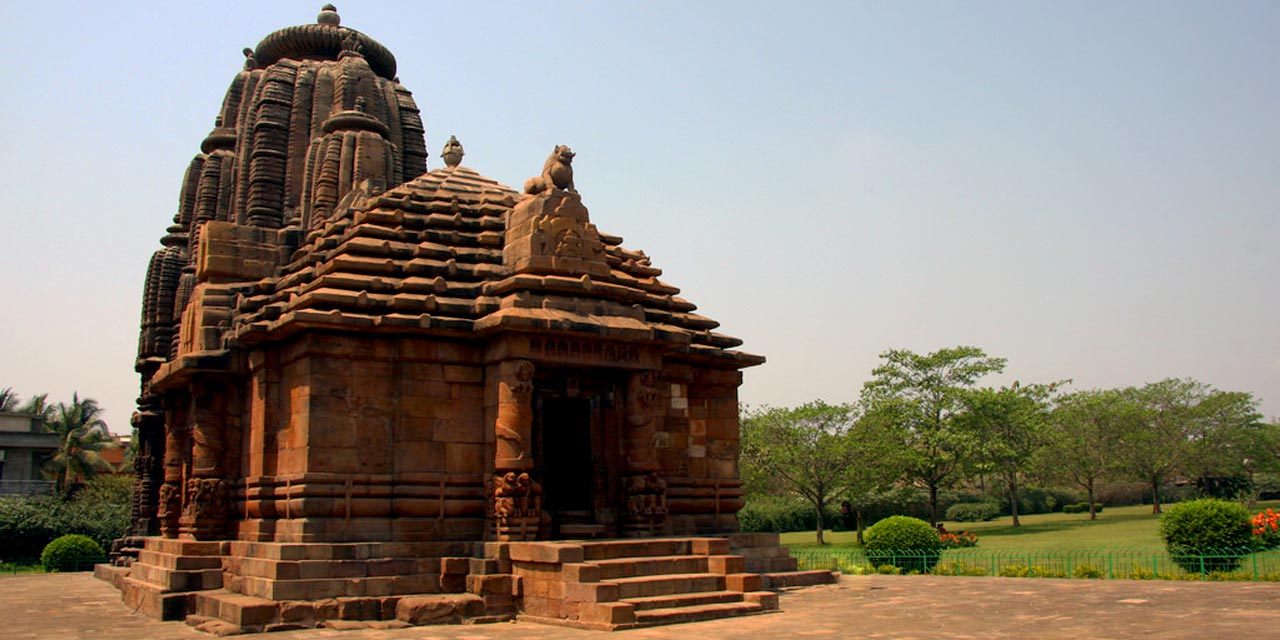 The Rajarani Temple is one of the sacred and popular shrines of the ‘Temple City’ – Bhubaneswar in Odisha. Built in the 11th century, this temple boasts of spectacular architecture, which is typical of Kalinga temple architectural style. There is no presiding deity in the shrine, but it is believed that it is dedicated to Lord Shiva.

The temple is built with red and yellow colored sandstone, which is referred to as ‘Rajarani’ in the local language. Hence, the temple is named as Rajarani Temple. Locally this temple is also known as ‘Love Temple’ as many images of beautiful couples and women have been sculpted on the walls of it.

One of the highlights of this shrine is that it hosts the annual Rajarani Music Festival in the month of January-February. This popular festival brings musicians from across the country on a single platform to showcase the musical depth and diversity of India. Music enthusiasts from across India join this three-day festival each year.

The history of the Rajarani Temple dates back to the 11th century when it was built by lndraratha, a famous Somavamsi dynasty ruler. As per historians, earlier it was called as Indreswara Temple, supposedly named after Indraratha. However, there is another school of thought that indicates that the Indreswara was named after Lord Shiva. Although there is no presiding deity of this temple, there is a strong belief that it has connection to Shaivism.

Later on, the temple came to be known as Rajarani because of its color – yellow and red sandstone – that is locally known as Rajarani. In 1903, the temple underwent renovation and refurbishment as by this time, the structure had reached a dilapidated state. Currently, the shrine is maintained by the Archaeological Survey of India.

Every year, the Department of Tourism of the Government of Odisha holds the Rajarani Music Festival in the temple premises, in the month of January-February. This festival was first started in 2003 in collaboration with Bhubaneswar Music Circle. Musicians from across the country participate in this three-day cultural extravaganza, which lays emphasis on the beauty of Indian classical music – Hindustani, Odissi and Carnatic. This music festival receives heavy footfall on all the three days.

The Rajarani Temple has a typical Kalinga style of temple architecture. Built on a three-molded platform in Pancharatha style, the shrine has two sections - the Jagamohana (area from which devotees witness the sanctum) and the Vimana (inner sanctum). While the Jagamohana has a roof with pyramidal shape, the Vimana has a curvilinear spire (Shikhara) that goes up to 17.9 m.

On the walls of the shrine, engravings of the marriage portrayal of Lord Shiva and Goddess Parvati have been beautifully done. The splendid images and engravings on the walls and doors of the temple point to the fact that this temple is dedicated to Lord Shiva.

One of the most interesting and impressive features of the temple is in its base part, from which sculptures protrude in eight directions. These are of Kubera (God of Wealth), Yama (God of Death), Vayu (God of Wind), Indra (God of Rain), Agni (God of Fire), Nirriti (God of Suffering), Varuna (God of Ocean) and Ishana (Shiva). They are said to be the protectors of this ancient Hindu temple.

Things to do at Rajarani Temple of Bhubaneswar

Witnessing its grand architecture is the foremost thing to do at the Rajarani Temple. The intricately-carved sculptures and the varied beautiful images on the walls and the doors of the shrine are definitely worth exploring. If tourists are visiting this famous temple in Bhubaneswar during January-February, then they must try and be a part of the Rajarani Music Festival – a cultural extravaganza of Indian classical music.

Since there are a number of temples in Bhubaneswar, tourists can head to popular nearby shrines near the Rajarani Temple. One such splendid place of worship nearby is the Mukteswara Temple, which is only 800 m away and it is only about 10 min walk from here. Some of the other such close by temples worth visiting are Ananta Basudeva Temple, Lingaraj Temple, Brahmeswara Temple and Parshurameswara Temple.

There is an entry fee of Rs. 5 for Indians and Rs. 250 for foreign visitors to visit this shrine. No fee is charged for children below 15 years. Entry into the temple premises for the public starts at 6.30 am and closes at 7:30 pm.

How to Reach Rajarani Temple Bhubaneswar

Since the temple is located in one of the prime locations of Bhubaneswar, it can be easily reached from the railway station, bus stand, airport and other parts of the city. Commuting to the temple is quite easy as there is regular availability of local buses, private taxis and auto rickshaws in Bhubaneswar.

The distance between the Rajarani Temple and the Biju Patnaik International Airport is approximately 4 km. It takes about 11 minutes to reach the shrine by taxi or auto rickshaw. From the Bhubaneswar railway station, the distance is about 3.9 km and can be easily covered in approximately 10 minutes by availing an auto rickshaw or taxi service. Local buses take around 30-35 minutes to reach the temple from the railway station. You can also book a private cab from top car rental companies in Bhubaneswar to visit all the popular sightseeing places of Bhubaneswar along with the Rajarani temple.

Explore Bhubaneswar like never before by booking a Bhubaneswar tour package with us. At Bhubaneswar Tourism, a division of Holidays DNA, we offer tour packages catering to different budgets and holiday needs. Book one that suits you best or ask for customisation of the package according to your preferences. To know more, please fill the Contact Us form.