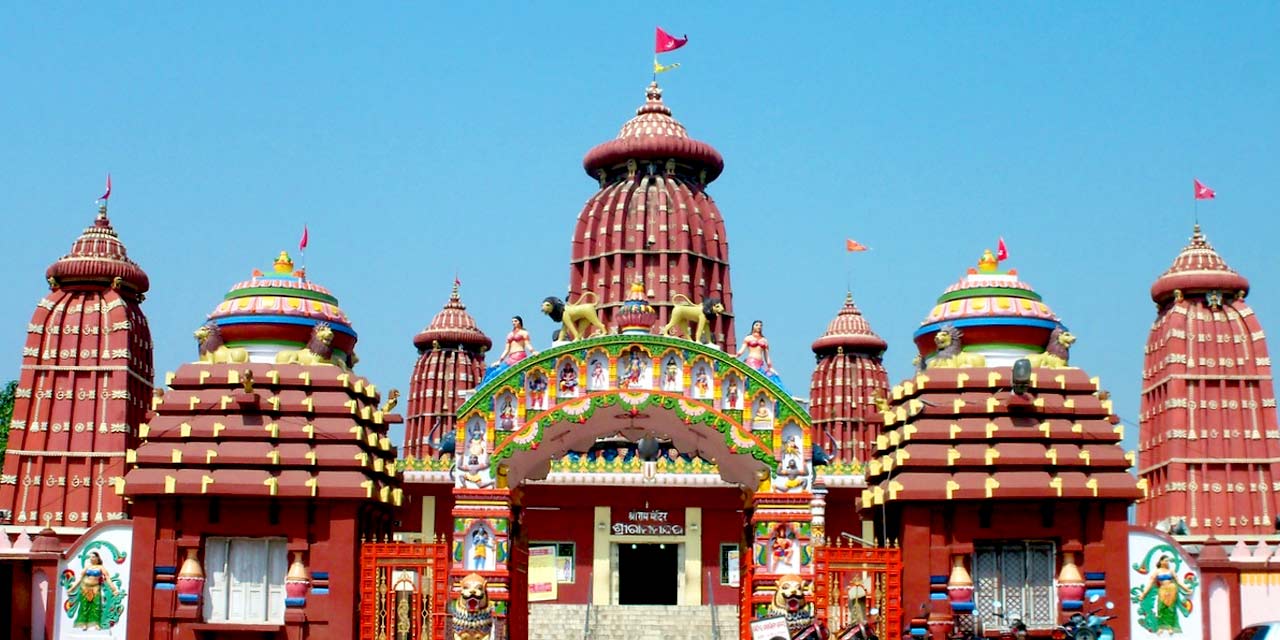 Ram Mandir is one of the most famous temples of the ‘Temple City of India’ – Bhubaneswar. It houses beautiful images of Lord Rama, his consort Goddess Sita and his brother Lord Lakhshmana. This shrine is a modern structure; however, people talk about its architecture in the same breath as the architecture of some of the other ancient temples in the city. One of the significant aspects of this temple is its large spires that are visible from different parts of the city.

Hundreds of devotees visit the shrine daily, and this number increases manifold on special occasions like Ram Navami and Dussehera. The bustling atmosphere of the place can be experienced from its entrance gate itself, where many flower vendors can be seen selling fresh flowers for Puja.

The temple has been built by a private trust that still maintains it. Besides the main deities, idols of other Hindu gods and goddesses such as Lord Shiva and Lord Hanuman are also housed in the temple.

A number of festivals including Ram Navami, Janmashtami, Shivaratri, Dussehera, Pana Sankranti and Vivaha Panchami are celebrated with great pomp, and on these occasions, the temple is beautifully decorated. On the occasion of Raksha Bandhan, an annual fair is organized every year at the temple. This festive celebration becomes more special as devotees throng to the shrine to be a part of it.

The architecture of Ram Mandir is one of the talking points among its visitors, who are mesmerized by the way it has been built. The temple’s interiors are beautifully decorated while the outer structures are all saffron in color, depicting the spirituality of the Sanatan Dharma.

The intricate designs on its various spires are a sight to behold; specially its spires, which are so prominent that they are recognizable even from a distance. Besides the temple area, there is a small well-maintained garden in the complex.

Things to do in Ram Mandir Bhubaneswar

The evening ‘Aarti’ performed at Ram Mandir holds a special place in the hearts of the locals, who make it a point to witness it, if they are in this part of the city. The spiritual atmosphere during that time is something worth experiencing. Besides spending peaceful time at the shrine, tourists can relax in the garden located inside the complex and admire the temple’s architectural beauty.

Just across the temple, a number of street food vendors can be seen offering a range of local delicacies. In the evenings, this place buzzes with food lovers of Bhubaneswar.

Since Ram Mandir is located at an important area of the city, tourists can easily head to the other important attractions from here. Some of these are the famous Lingaraj Temple, Raja Rani Temple, Mukteswara Temple and Ananta Vasudeva Temple.

1. Lingaraj Temple: Devoted to Lord, the Lingaraj Temple is an 11th century Hindu shrine. It is one of the oldest and the largest holy places in the city. Besides the main temple, there are several smaller shrines in its complex, and each of these is a fine example of the Kalinga style of architecture. The carvings and sculptures on its walls are worth witnessing.

3. Raja Rani Temple: Believed to be devoted to Lord Shiva, the Raja Rani Temple in Bhubaneswar is a 11th century temple. The shrine is called Raja Rani because of the fact that it is made of yellow and red sandstone. These two colors are locally called ‘Raja Rani’.

4. Mukteswara Temple: The 35-feet high Mukteswara Temple is devoted to Lord Shiva. It was built in the 10th century, and is famous for its architecture because of which it is considered as a ‘Gem of Odisha’. Besides the intricate carvings and sculptures, the most important architectural aspect to explore here is its arched gateway, which is locally called ‘Torana’.

There is no entry fee for visitors at Ram Mandir. The temple is opened for visitors at 6 am and closed at 9.30 pm, on all days of the week. The best time to visit the shrine is between 4 pm and 8 pm. The visitor timings can vary during celebrations of festivals and grand events at the temple.

How to reach Ram Mandir Bhubaneswar

Ram Mandir is located in a prominent area of Bhubaneswar, and hence, it can be easily reached from any place in the city with ease by availing cab from top car rental companies in Bhubaneswar, auto rickshaw or bus service. The Biju Patnaik International Airport lies at an approximate distance of 4.7 km from Ram Mandir while the Bhubaneswar Railway Station is only about 1.4 km away. The Baramunda Bus Stand, where buses from different parts of Odisha ply to, is about 7.6 km away.

We at Bhubaneswar Tourism, a division of Holidays DNA offer all-inclusive Bhubaneswar Tour packages that can help you have a perfect time of your life while exploring the tourist places in Bhubaneswar. Our packages are designed keeping your budget and other preferences in mind. Fill out the Contact Us form to know more about us!